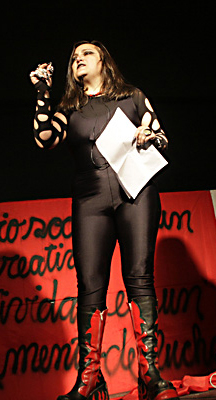 María Galindo Neder (born 1964) is a Bolivian anarcha-feminist and psychologist. She has worked as a radio presenter and television host. She has written three books and is also a screenwriter.

Born in Cochabamba (another source says La Paz) to an upper-middle-class family, she left Bolivia with a visa as a nun to study at a Vatican university. She returned in 1992, and on March 8, she co-founded Mujeres Creando ("Women Creating"), a Bolivian collective and social movement which confront sexism and homophobia. She broadcasts a regular radio program from ''Mujeres Creando''. For her controversial actions (often labeled as performance art or street theater), she was arrested and assaulted several times by Bolivian police even though her older brother, José Antonio Galindo Neder, was a minister under former president Carlos Mesa. She also champions the rights of women who are victims of abuse and sexual harassment caused by machismo. Gallindo, a psychologist, teaches sociology at Higher University of San Andrés. She states, "The street is the most important political setting... So we took the street and made the graffiti that we continue to make in four cities in the country. With graffiti we try to mix different topics simultaneously." Galindo is an atheist.

On 2019 Paul B. Preciado wrote about her "Over the past 15 years, Galindo has created a radical artistic practice: an artist, performer, activist, writer and cofounder of the Bolivian collective Mujeres Creando, she brings the subaltern practices and knowledge of indigenous women into dialogue with the political and literary traditions of anarchism, punk and nonwhite feminism. But what can art do in the face of an authoritarian neocolonialism in which the logics of feminism and indigenous identity politics have been absorbed within humanist, religious and neoliberal discourse as new strategies of control? Galindo answers by dislocating art from the spaces of the market and the gallery and bringing it right back to the place where it was born: the public square, the social ritual. Mujeres Creando’s public actions such as ''Pasarela Feminista'' (''Feminist Catwalk''), staged in the city of Santa Cruz, Bolivia, in 2014, sought to confront the white and heterosexual idealized feminine body, an image perpetuated by mainstream media, via a 13-hour ‘rebellion’ by women in the city’s streets in which they gave speeches while walking a makeshift catwalk in outfits that they felt both reclaimed and represented their own bodies and experiences as indigenous women." Provided by Wikipedia
1