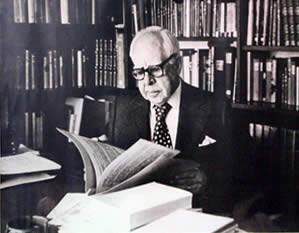 Luis Alberto Félix Sánchez Sánchez (October 12, 1900 – February 6, 1994) was a Peruvian lawyer, jurist, philosopher, historian, writer and politician. A historic member of the Peruvian Aprista Party, he became a Senator and member of two Constitutional Assemblies, in which the second one (1978–1980), he occupied the Vice-Presidency of the Assembly and the Presidency of the Constitution Committee. During the Presidency of Alan García (1985–1990), he was his Second Vice President and was appointed for a short period as Prime Minister of Peru. In Congress he served as President of the Senate two occasions (1966–1967 and 1985–1986). He is the oldest Vice President of Peru, taking office at the age of 84 years, 289 days. Provided by Wikipedia
1