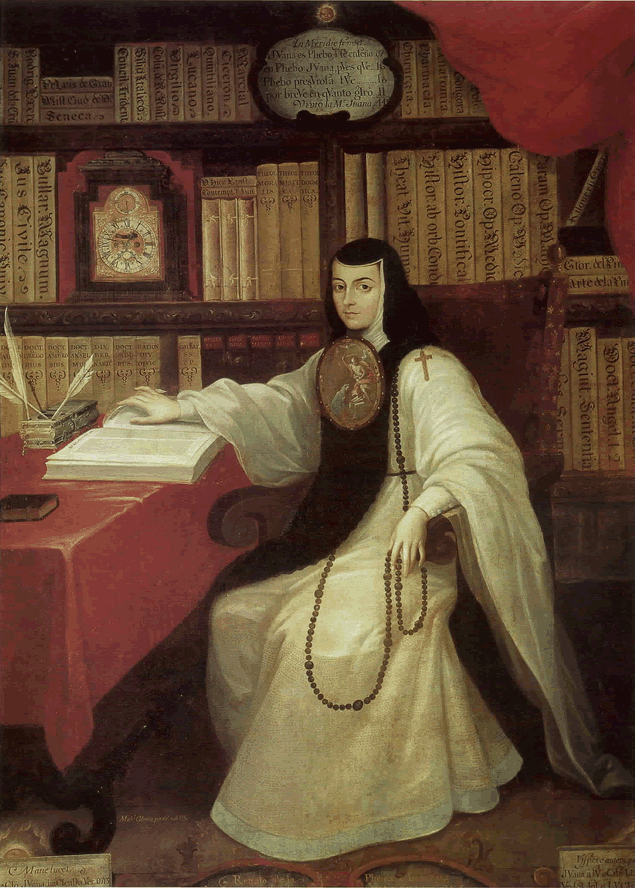 '''''Doña'' Inés de Asbaje y Ramírez de Santillana, better known as Sor Juana Inés de la Cruz''' (12 November 1648 – 17 April 1695) was a Mexican writer, philosopher, composer and poet of the Baroque period, and Hieronymite nun. Her contributions to the Spanish Golden Age gained her the nicknames of "The Tenth Muse" or "The Phoenix of America",; historian Stuart Murray calls her a flame that rose from the ashes of "religious authoritarianism".

Sor Juana lived during Mexico's colonial period, making her a contributor both to early Spanish literature as well as to the broader literature of the Spanish Golden Age. Beginning her studies at a young age, Sor Juana was fluent in Latin and also wrote in Nahuatl, and became known for her philosophy in her teens. Sor Juana educated herself in her own library, which was mostly inherited from her grandfather. After joining a nunnery in 1667, Sor Juana began writing poetry and prose dealing with such topics as love, environmentalism, feminism, and religion. She turned her nun's quarters into a salon, visited by New Spain's female intellectual elite, including ''Doña'' Eleonora del Carreto, Marchioness of Mancera, and ''Doña'' Maria Luisa Gonzaga, Countess of Paredes de Nava, both ''Vicereines'' of the New Spain, amongst others. Her criticism of misogyny and the hypocrisy of men led to her condemnation by the Bishop of Puebla, and in 1694 she was forced to sell her collection of books and focus on charity towards the poor. She died the next year, having caught the plague while treating her sisters.

After she had faded from academic discourse for hundreds of years, Nobel Prize winner Octavio Paz re-established Sor Juana's importance in modern times. Scholars now interpret Sor Juana as a protofeminist, and she is the subject of vibrant discourse about themes such as colonialism, education rights, women's religious authority, and writing as examples of feminist advocacy. Provided by Wikipedia
1