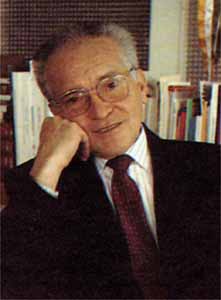 Orlando Fals Borda (Barranquilla, 11 July 1925 - Bogotá, 12 August 2008) was a Colombian researcher and sociologist, one of the most important Latin American thinkers, and one of the founders of participatory action research. Together with Father Camilo Torres Restrepo, in 1959 he set up one of the first sociology faculty in Latin America at the National University of Colombia. His perspective built a singular bond between science and politics that changed dramatically the relations between society and knowledge. He also played a key role of the foundation of CLACSO (Latin American Council of Social Sciences) at the end of the sixties. An essential part of his effort was centered on the construction of a perspective from the border and the periphery, focused on the subordination conditions of the Latin American societies. A polemic thinker and militant, Fals Borda developed an ethical conception of the subversion based on a particular method of analysis and a praxis called "positive subversion" through the idea of ''commitment''. Fals Borda's perspective also contributed to develop some recent critical interpretations, such as postcolonialism linked to the analysis of the effects of modernity/coloniality on the South. Provided by Wikipedia
1