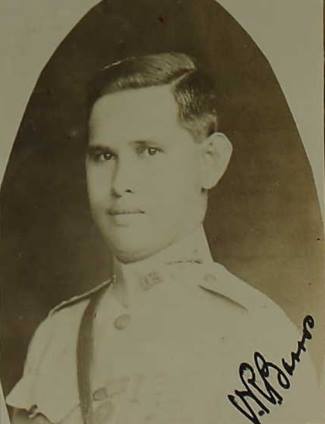 Vicente Rico Barros (July 27, 1887 – May 2, 1966) was a Filipino U.S. Army Major who played a major role in the formation of the first federalized army of the Philippines at the end of World War I (1917–18). Barros was formerly an officer of the Philippine Scouts (a defunct division of the U.S. Army). He was a decorated soldier and a veteran of the Philippine Constabulary (1907–1911) during the Moro Rebellion before being absorbed by the U.S. Army's Philippine Division. Former Governor General of the Philippines Francis B. Harrison cited Barros for his role in a brief history of the Philippine National Guard, "The Division was commanded by Brigadier-General F.R. Day, U.S.A.; all officers above the grade of Major, by insistence of the army, were Americans, except Lieutenant-Colonel Vicente R. Barros, a West Point graduate." Provided by Wikipedia
1